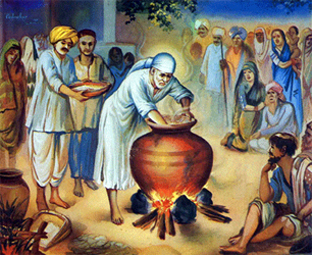 Sai Baba did not preach or deliver sermons, and there are no known philosophical compositions that can be attributed to Sai Baba. However, his way of life has influenced far many people than many philosophers have. Sai Baba was in unison with God, and that is why his very presence had an elevating influence on those who came for his Darshan, and that darshan was enough to transform even a casual visitor - an atheist into a believer, a pessimist into an optimist, a sinner into a God's man. By 'philosophy of Sai Baba', we mean his way of life which exemplified certain principles. These principles weave the fabric of Baba's philosophy and help millions of his devotees around the world. The corner stones of Baba's principles include:

Equality: Baba was extremely successful in building strong bonds between individuals of different faiths and beliefs. Also, to Baba, there is no difference between poverty and prosperity. Once a person stepped into his Dwarkamai .he was neither rich nor poor, neither a Raja nor Praja (subjects), neither a landlord nor a labourer. People coming to him forget these differences of wealth and position. The common meals which Sai Baba cooked and served with his own hands in Dwarkamai was an object lesson in equality

Devotion: One important feature in all of Baba's ideology is an emphasis on devotion. He was convinced of the power of prayer in relieving physical and mental distress, but advised all individuals to exercise caution and never be swept away by fanaticism. He knew the pitfalls of living in a deep hole under the guise of devotion with little or no action. He emphasized that devotion leads to focus, which in turn leads to identification of goals and objectives in life; both spiritual and material. Upon recognizing the needs and priorities, a focused being accomplishes what it seeks. Sai Baba used his skills to educate the spiritually-ignorant on the need to acquire knowledge of the divine for enhancing their intellects, which he believed would produce wisdom, which in turn would lead to devotion.

Humility: Baba always stayed simple and did not publicize his holiness. Despite being an immortal, he remains humble to the core. It was just for this reason that Baba never consented to be a Guru and never made any disciples, for this institution of Gurus leads to ownership and property rights which Baba strictly opposed. This shows that a hundred years back Baba put into practice the principles of democracy, socialism and secularism which form the basis for many societies today.